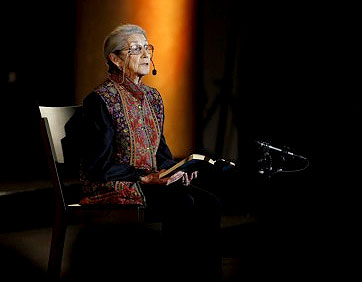 The political novel is that difficult combination of esthetics and ethics that merges anecdote into history. To be truly successful as art, it most forego “political speech” as such, unless it be construed as the true conviction of fictionalized characters. Nadine Gordimer is a member of that elusive elite, the writer who reconciles the conflicting demands of both literature and politics. She was awarded the Nobel Prize for Literature in 1991 as a recognition of her talent.

Born in 1923 in the mining town of Springs, South Africa, of Jewish immigrant parents –her father came from Lithuania and her mother from England- she acquired her real education from reading due to a childhood illness. Her first novel, The Lying Days  (1953),  is the story of a young girl, Helen Shaw, who in the course of her life comes to grips with the dreadful realities of her country. She is restricted by circumstances of class, race and gender which she must break through in order to understand the black world of the mining town, and eventually, of South Africa as a whole. This confrontation leads to her involvement in the liberal movements of the forties and fifties, and ultimately to disenchantment before the rise of power of Afrikaner nationalism in 1948. How much of this disenchantment is Gordimer´s own, we can only guess. What we do know is that it led to a life-long struggle against Apartheid and in favour of freedom for the black population of South Africa.

In her Nobel acceptance speech, Gordimer said: “This aesthetic venture of ours becomes subversive when the shameful secrets of our times are explored deeply, with the artist’s rebellious integrity to the state of being manifest around her or him; then the writer’s themes and characters inevitably are formed by the pressures and distortions of that society”. Subversive her venture certainly was, so much so that her novels were banned in her country for a time. But they brought a new focus on the plight of more than two thirds of the population of South Africa, subject to life in the townships -those slums deprived of the most elementary of comforts- to carrying a pass in order to enter the white man’s world and be allowed to perform hard or unwanted tasks.

Gordimer´s world is white, hers is the life of a white liberal, her books are read by her peers. The repressed world of blacks she writes for and about becomes the Other in her books, this Other she must strive to understand in order to bestow a voice on those who cannot speak for themselves. Gordimer tells, in an article in the New York Review of Books, of a family she knew. The father, a white political activist, dies in jail. She is fascinated by this group of people, by their life haunted by danger and a fierce self-discipline. Gordimer met the daughter, a young girl dressed in a private school´s uniform, waiting to visit her father in jail. When she was about to publish her novel -which she does not mention by name, but we can identify as Burger´s Daughter- the scene haunted her. What would this girl –now an adult- think of the woman who used her dead father as a character in her book? Comparisons were inevitable, and she could imagine this young person feeling betrayed, accusing her, Gordimer, of using the life and death of her father for her own benefit. She sent her the manuscript, waited for weeks, and one day saw the young woman at her door: “This was our life” she told her. We can indeed feel the characters of Burger’s daughter (1979) -perhaps Gordimer´s best-known novel: the conflict of Rose, daughter of a martyr dead for the cause, whose inheritance weighs heavily on her present and her future; the reluctance of certain black leaders to accept the white man´s life as an offering. Linel Burger knows that his goals will never be attained in his lifetime: “No more hunger, no more pain”. During the trial that imprisons him for life, he sustains that, if whites are guilty as a group, that guilt must be atoned for individually and not collectively. His sacrifice is voluntary, in the name of that collective guilt, of a régime of oppression that his actions are incapable of transforming. “My covenant is with the victims of apartheid...I would be guilty only if I were innocent of working to destroy racism in my country”.

There is a hidden conflict within the book: is the leitmotiv of the struggle the blackman´s triumph or the whiteman´s gift? White Europeans are subconsciously aware of their superiority; if not their own, as individuals, of the superiority of Western culture, values, civilization. In their role as heroic prophets, they are willing to die in order to bestow all of them on the miserable masses enslaved by their peers. They do not know, or are unwilling to accept, that Western values may not be adequate for a people as yet immersed in tribal conflict. “Blackness is the black man´s refusing to believe that the white man´s way of life is best for blacks”

Burger´s Daughter, The Late Bourgeois World (1966), A Guest of Honour (1970), July´s People (1981) are all links in the chain that ties Gordimer to her role as social and political fighter. What happens after? A writer with one aim in mind, with one theme made up of many stories, must feel at a loss when change finally comes about. Apartheid is dismantled, Nelson Mandela comes to power as the first black President of a predominantly black people. “The danger lies in that we don´t  see what there is after the struggle, we don´t think of what there is on the other side. We have to know where we´re going, man” says Gordimer through one of her characters. On the other side of the struggle is a country torn by enslavement and massacres, by decades of bitter enmity and hate; 80% of the people lack running water, drainage, electricity; masses of deprived, uneducated youngsters roam the streets where not so long ago they were exposed to seizure and jail. But political exiles start the journey home, the inteligentsia that took refuge abroad bring back foreign-learned skills. The reconstruction slowly begins.

Gordimer understands change, and her themes change accordingly. Where before “my novels are anti-apartheid...because, if you write honestly about South Africa, apartheid damns itself”, now the emphasis is on the turmoil of reconstruction. None to Accompany Me and The House Gun (1998) belong to this later stage of consciousness. In the first, the story deals with two women, Vera, a white lawyer, and Sibongile, a black expatriate. Vera through her legal work, Sibongile as a member of the Committee in charge of the new Constitution face a new epoch, and an internal conflict with their husbands, not as successful or involved. Gordimer is a lucid observer of the new middle classes, so vastly deprived in the past and now arrived at an unexpected well-being. Interracial relationships flourish, no longer restricted or opposed. The struggle is now for power and success: the white man´s legacy.

The House Gun is elegant, intelligent and dramatic. A middle-aged white couple meet with one of life´s deepest shocks: their brilliant, handsome son, a successful architect, is in prison accused of murdering a close friend. The lawyer in charge of defending him is black. He studied in England, came back trailing a story of professional prestige. The questions multiply: Is he up to the task? What is it that we did wrong? Guilt and blame threaten a heretofore affectionate marriage. But this is not only about private tragedy. The house gun speaks for itself: a weapon bought by otherwise peaceful young men in fear of assault, robbery, kidnapping. The streets of Johanesburg are plagued by that contemporary urban curse, violence. If there had been no gun, would there have been a murder? The plot unravels with Gordimer´s accustomed precision and insight. “As I began to write it, I realized it had something to do with the climate of violence that we feel so strongly about us, and not just in our country. It is a characteristic of big-city life everywhere”.

When we read Gordimer´s latest novels, we realize that a good writer´s, a good political writer´s concern is not only with society and history, but with human beings trapped in history.